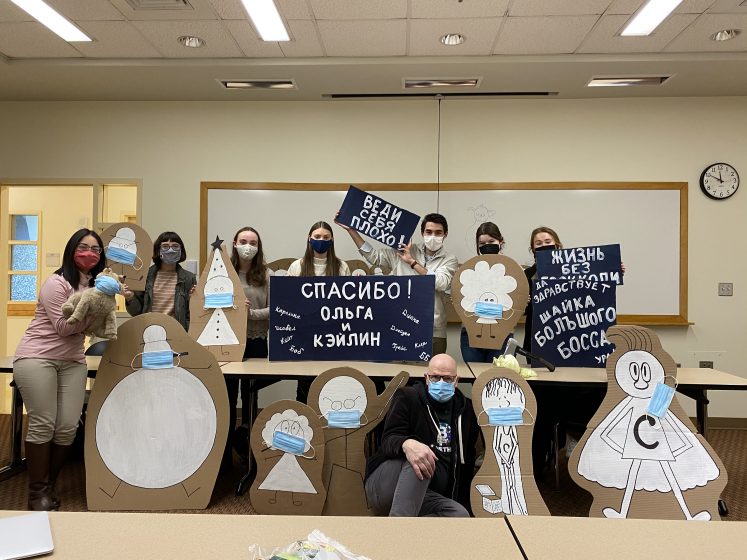 Learning a new language is hard, especially when you have to either be on zoom or super spaced out and masked in a classroom. This past module made me especially grateful to have an amazing Russian professor, Dennis Browne, who kept us engaged by learning the language through speaking and listening. Every day, we listened to a Russian song and followed along with a printout of the lyrics. At the end of the week, we would vote on the best song of the week. On our last day of class, we had a final bracket of the top songs of each week, plus two picks from our TAs. Not all of my favorites made it into this final bracket, but my top pick was our class champion.

Even if you don’t speak Russian, it’s super interesting to listen to a mix of music from another country. My top ten is kind of all over the place in terms of genre and era, but they all slap. Check it out!

This was the winner of our class’s bracket, and is an absolute jam. It’s actually a Russian cover of a Brazilian Portuguese song called “Tic, Tic, Tac” by Carrapicho, which is why it sounds more like Latin music than traditional Russian music. Even more interesting than the song itself is the singer, Murat Nasyrov. Nasyrov was born in Kazakhstan, and was of Uyghur ethnicity. He tragically died by falling off a balcony in an apparent suicide, but lots of Russians insist that he was actually murdered. Specifically, there have been theories that he was given wine laced with LSD, and he fell off the balcony because he was hallucinating. That’s the theory I’m going with, but I guess we’ll never know.

This one didn’t even make the final bracket, but I think it should have. SBPCh is an indie electronic band – definitely not usual listening for this bluegrass and folk fan. But, something about their beat is so unique and fun to listen to. If you like “Zloi”, I’d recommend checking out some of the songs from their 2018 album Mi nye spali, mi snilis (We Were Not Sleeping, We Were Dreaming). I particularly like “Komnata” (“Room”) and  “Proval” (“Failure”).

DDT was a nonconformist rock band founded in 1980; yes, they named themselves after the pesticide. They didn’t necessarily set out to be political dissidents, but in the former Soviet Union, recognizing the downsides of the government was pretty dangerous. In my opinion, “Rodina” is a demonstration of healthy patriotism: they recognize that their homeland is flawed and maybe even dangerous, but they love it and want to fix it nonetheless.

The intro to this song was instantly iconic in our RUS102 class. The drums and horns are just so fun, and sets up a kind of sarcastic celebration of the culture of the former Soviet countries. Fun fact: the band Lyapis Trubetskoy was actually from Belarus, not Russia!

I said before that I’m a bluegrass fan, and my professor tried his very hardest to find music that would appeal to each of us. So, he did some digging, and found Otava Yo for me. I love these guys: they’ve got a very cool instrumentation of violin, drum, bass, and a mix of traditional Russian instruments like zhaleika, gusli, and darabouka. Also, their music videos are hilarious. 10/10 recommend if you like bluegrass or other folk music!

Crocodile Gena’s Birthday Song appeared on our final exam as a listening exercise. One of my friend’s describes it as the “spooky birthday song”, but it’s really not that spooky by Russian standards. It’s just a friendly little crocodile playing his accordion in the rain, wishing it was his birthday everyday. The really spooky part is when you have to remember which prepositions go where during your final exam but you keep getting distracted by his adorable little accordion.

Just a super catchy song about going on vacation. #quarantinedreaming

I call this one “The OTHER American Boy”. One time my housemate and I took a midnight sub request and played the Estelle and Kanye “American Boy” immediately before this one. Apologies to anyone listening to that. Regardless, this song is the exact kind of dumb pop you just need sometimes when you’re in a bad mood, and it’s in a weird Russian-English hybrid (runglish?). Added bonus points to Kombinaciya for being bold enough to include the line, “He is American, he is a boy” in a song called “American Boy”. Groundbreaking.

This song gets stuck in my head every time I listen to it, but I can’t get mad about it. I think this is the only acapella Russian song I’ve heard, and these five girls do a great job. Plus, the YouTube video for this performance is from 2014 and gives off STRONG Pitch Perfect vibes.

The only Russian rap song I’ve heard. Thought I was going to have a seizure in class from the music video, but the song itself is good! It’s super interesting how similar it sounds to American and Latin rap; there’s something a little bit sad about hearing music from another country and it not really sounding that different besides being in a different music, but it’s also cool evidence of how music interacts across cultures.