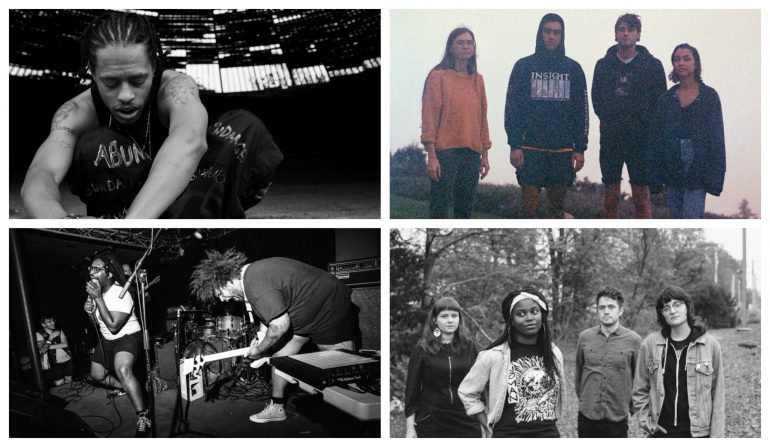 Hey folks, it’s your friendly neighborhood general manager here to list off what I thought were the best punk songs of 2020.

I’m not going to go into the whole “2020 was bad so punk music was good” narrative that I think is super flawed and also reductive, but I do think that a lot of really cool, boundary-pushing punk came out this year. As an avid fan of the genre and host of a punk show on this station, I figured I would recommend some of my favorites from this year. I’m not gonna rank these in any kind of order but I do think they’re better than most of the other stuff I heard this year.

This track, from Oahu-based hardcore band Søøn, outlines the album’s mission statement blatantly and aggressively. Opening with audio from a Greta Thunberg speech placed over a death march of an intro section, the song rips into double time as vocalist Kalena Suhayda launches into relentless delivery of fast paced screams. The lyrics have a distinct, desperate sort of eco-socialist bent to them; as the song slides into a windmill-worthy breakdown, the title of the album is screamed: “What the fuck did we do to the earth”.

Boston based trap and punk outfit Camp Blood, made up of producer-vocalist Haasan Barclay and rapper Shaka Dendy, is consistently on the cutting edge of punk music. Relentless vocals over the most disgusting drum machines you’ve ever heard on a punk song, cut with a wall-punching, horrifically bass-heavy breakdown. Culminating in a savage and bounce-heavy final chorus with some of the cleanest rim clicks you’ve ever heard, this song genuinely sounds like the future of punk music.

This track from Irish-post punk band Fontaines D.C. is a stand out from their most recent record, A Hero’s Death. The bitter-sounding and dejected vocal style of lead vocalist Grian Chatten, combined with a descending guitar lead and dynamic, cymbal-heavy drumming provide the song with a distinct, forward-falling motion.

2020’s Negro is a genre departure for rapper and alternative hip hop artist Pink Siifu, often sounding like a physical fight of influences. Rap, jazz, and hardcore punk compete and blend to create a record that is as unique as it is angry. FK begins with Siifu screaming over a blown-out punk chord progression, building into a wall of noise with a distant guitar lead screaming in the background of the mix. Even as the song washes into lo-fi and ambient territory towards the end, it still maintains a cutting sense of urgency. The lyrics are angry and to the point; other highlights from the album include “Chris Dorner.” and “we need mo color”.

Bad Boys III by Catsick, a street/egg punk band from Christchurch New Zealand, is one of the more ridiculous songs on this list. Released on a split with Russian hardcore band CONFLICTED in August of this year, the song begins with shouted gang vocals over a fast-paced, angular bass line. It then bridges immediately into an interpolation of Bad Boys by Inner Circle, otherwise known as the theme song for  the TV show “Cops”. If you like punk music made by people who sound like they’re making fun of you, check this one out.

I like Gulch a lot. I think they bridge a genre gap between the freak-hardcore of the Pacific Northwest and the broader beatdown scene, and this song is a key example of that. Gulch plays fast, throwing down blast beats and two-step rhythms amidst genuinely disgusting vocals, never staying in one place too long or going where the listener expects. The breakdown at the end of the song is sludgy and relentless, with enough weight and motion to satisfy any metalcore fan. The genuinely inhuman squeals delivered by lead vocalist Eliot Morrow are off-putting and freakish, signaling that this is indeed not your father’s hardcore record.

“Leave Town” by D.C. punk band Bacchae is the first song off of their 2020 release Pleasure Vision, beginning with jagged guitars, a rolling bass line, and acidic yet hooky vocals. The breakdown is great, the song is catchy and rhythmically interesting, and it quite simply doesn’t sound like anything else. It’s got post-punk rhythms with plenty of modern indie rock influence. Check it out.

Maine based indie punk band Amiright? blends genres all over the place on  Lavender House, finding a sweet spot on “Gone” between garage rock, surf punk, and emo. The song, hooky and danceable from the outset, shifts in tone through the bridge into a slow, almost cinematic final section, creating adequate space for the lyrical themes of loss and winter. Easily one of the best punk bands in the great state of Maine right now, definitely one you should check out.

Philly experimental punk and screamo band Soul Glo push the listener to the breaking point on “(Quietly) Do the Right Thing.” These are easily the most impressive vocals in heavy music I’ve heard all year, as lead singer Pierce Jordan delivers absolutely punishing screams over and over. More importantly, he does it fast. Not a single riff overstays its welcome; the drum breaks and bass riffs are especially impressive and all serve to create one of the most intense songs I think I’ve ever heard.

To be honest with you, I know little to nothing about this project. I discovered this record on a music blog a little while back, and I can’t find much about them. As far as I can tell, they’re a furry from Mexico, and are incredibly prolific, putting out twelve releases so far this year. It’s really cool lo-fi punk music; the whole album sounds the end of the world. This song has handclaps and cool guitar playing, and the record is super cohesive. I’m not going to link the Instagram due to mildly pornographic content but you can certainly find it if you want to.