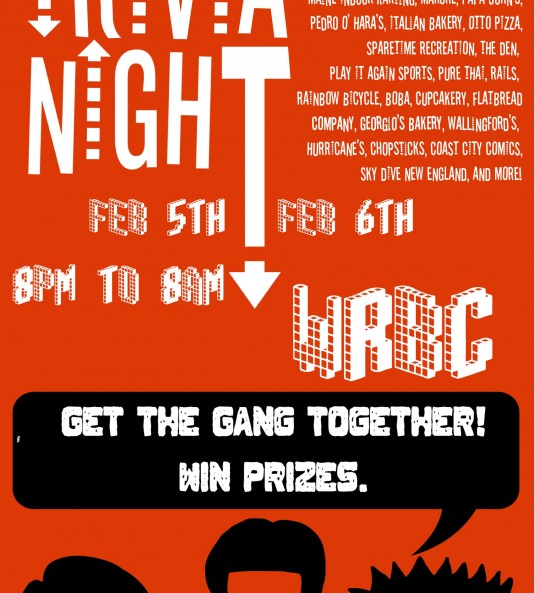 Do not proceed if: you are faint of heart, spirit, fervor, or funk.

Rules of the GAME:

To participate in Trivia Night, you need a TEAM. Said team can have as many people as you want – there are no limits. Teams greater than seven are recommended. Sign ups will be during the first hour of the competition, 8 – 9 PM. To register, call in at the provided number (this will come later). Also necessary: a knack for figuring out the obscure songs and trivia questions that WRBC throws at you. Each team is evaluated according to how many points they win.

There are three ways to receive POINTS:

1) TRIVIA: While tuning in to 91.5 FM all night, you will hear all sorts of songs, from pop hits to obscure Chinese folk ballads, and each song has a corresponding trivia question. Using the special trivia night telephone number, call in (before the song ends!) and tell us the title of the song, the artist who is performing it, and the answer to the trivia question. Each of those answers are worth 1 point, so every song is an opportunity to get 3 points.

2) The real excitement begins with PHYSICAL CHALLENGES. So maybe you didn’t know in which state it was illegal for mourners at a wake to eat more than three sandwiches? Well, luckily, you can earn more points through a random assortment of Physical Challenges, which are announced on the hour, and then performed on the half hour at the WRBC studio. Winners of Physical Challenges are given 15 points, 2nd Place 10 points, and 3rd Place 5 points. These challenges are judged by trivia night staff.

3) Make sure you’re paying attention, you don’t want to miss: Random points events. Because we’re nice people, sometimes points will be offered for certain random thangs. These could really help you out, especially if you’re creative and listening carefully. So be on the look out!
At the end of all the many hours of radio, trivia, and challenges, each team must perform a skit assigned during the last hour of the broadcast. This final challenge holds a very high point value, so if you want to win, make sure you make it entertaining and ingenious.

Once all that’s happened, a winner is declared, prizes are awarded and it’s really early in the morning. WRBC officially recommends sleeping.

Back to All Events